Transmutation is a magical technique that allows a sorcerer or sorceress to alter or deform or twist the physical features of any object so it is transformed into a desired object.

When the user cast this spell with the desired object clear in their mind on the target object (thin air of wood for example), the target object's molecular matter would dissolve and rearrange instantly so its shape and nature would be altered into that of the desired object. For instance, when someone uses this spell to turn the air molecules into a sword, said sword's nature would surprisingly be the same with a regular one.

The only known user of this enchantment is Balthazar Blake, who used it to transformed an emergency stairs into a bunch of confetti so it will not harm any civilians in his fight against Sun Lok. This spell was also possibly used by Sun Lok himself to dissipate and reform his body from a swarm of butterflies. 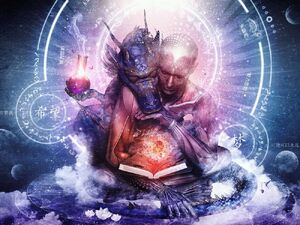 Transubstantial Transfiguration
Add a photo to this gallery

Retrieved from "https://sorcerers-apprentice.fandom.com/wiki/Transmutation?oldid=9824"
Community content is available under CC-BY-SA unless otherwise noted.