The Rising is a powerful and deadly magical curse that resurrects and commands a legion of long-dead sorcerers and it plays a major role in the 2010 Disney fantasy adventure movie The Sorcerer's Apprentice. This forbidden power was said to be sorcery's most dangerous spell that has ever existed.

Usage According to the Legend of The Rising

This accursed ceremony can be performed with incantations and a magic circular seal (be it the Morgana Star or the Merlin Circle) as the medium to open the rift between the mortal world and the netherworld. Such said incantations can be five (with the Morgana Star) or possibly six (with the Merlin Circle) lines long, and each line must be completed with a conjured trail of fiery Mana (preternatural energy of nature) that form its own part of the used circle.

Once both the circle and required incantations are completed, a dimensional rift, enveloped by dark clouds presumably from the netherworld itself, opens and releases deceased souls of wicked sorcerers into the world of the living. Returning to their mortal remains as jets of dark clouds, each crawls their way out of their grave while regenerating, ready to serve the one who brought them back to life. Similar rifts also open at different corners of the world with the same purpose, which means had The Rising conducted successfully and in full force, the caster will have more than enough army to conquer the world.

Maxim Horvath, a former Merlinean sorcerer, have discovered the means to improve the spell's performance through techno-magic means; by arranging 5 satellite dishes each positioned at what would be points of the formed Morgana Star, it will not only help properly arranging the circle, but also increase the rate of its success.

Unfortunately, such method comes with a setback where had the energy flow in the circle got interrupted (by moving the satellite away), all the magic released to conduct the ritual will implode into the caster and rendered him/her unconscious.

The Rising has Begun

Morgana le Fay and her evil allies including the 2 well-known Morganians, Maxim Horvath and Abigail Williams seeks to begin this dark ritual and revived all past conjurers of dark magic and rule the Earth in darkness.

The ritual of the Rising began this time with five satellite dishes positioned at 5 different buildings in modern day Manhattan in order to form a magic circle and perfect the ritual, all planned by Horvath while setting Morgana free to help her to conduct and finish the ritual.

This magical and sinister event was stopped by Balthazar Blake with the help of Dave Stutler and his girlfriend Becky and set free his beloved Veronica Gorloisen from the evil Morgana le Fay's control.

The Rising magic is featured as a plot element in the 2010 Nintendo DS videogame adaptation of Disney's The Sorcerer's Apprentice. 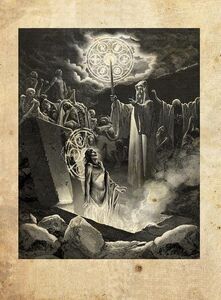 The illustration of The Rising written and told within the Encantus with the Merlin Circle in the background.

First incantation spoken by Morgana, which construct the Morgana Star for the ritual.

Final Incantation spoken, now with a dark cloud of Morganian spirits as The Rising begins.

The Morgana Star slowly forming as part of The Rising ritual. 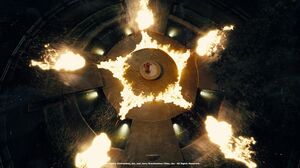 Veronica Gorloisen while being possessed by the evil spirit of Morgana le Fay, performs the ceremony of the Rising.

All the undead spirits of evil spellcasters emerged in every country on Earth including the United States of America during The Rising.

Many wicked spirits emerged and flew over the United States of America during The Rising.

Once The Rising began, undead evil sorcerers, whether they were Morganians or their predecessors, would rises. The first wave of the revived Morganians was the ones that buried in American Cemetery.

Many of the summoned dark spirits flew over the Great Wall of China during The Rising.

The soul of a Chinese Morganian warrior wielding an axe-like weapon, risen from the ground during The Rising.

More of the evil spirits of the dead arrived in Egypt during The Rising.

Another wave from The Rising influence hits Egypt. Even evil sorcerers whom remains sealed inside an Egyptian statue also resurrected.

The spirit of an Egyptian Morganian sorcerer attempting to break free from it's statue prison during The Rising.

One of the spirits of the long-dead evil conjurors arrived in Italy during The Rising.

After Egypt, another The Rising influence strikes Italy, and remains of evil sorcerers that used to decorate catacombs also revived. 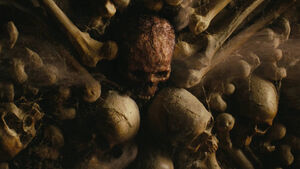 The soul of a deceased Morganian fused with this skull admist the skeletal wall during The Rising.

A ghoulish Morganian spellcaster begin to slowly become whole both body and soul during The Rising.

A demonic Morganian corpse attempting to crawl out of it's skeletal tomb during The Rising.

A ghoulish, screaming undead Morganian slowly becoming alive during The Rising.
Add a photo to this gallery

Retrieved from "https://sorcerers-apprentice.fandom.com/wiki/The_Rising?oldid=11506"
Community content is available under CC-BY-SA unless otherwise noted.