The Sorcerer Hat, commonly known as the "Sorcerer's Hat", is a special headwear with magical powers. It first appeared in the 1940 musical, Disney animated Disney movie Fantasia and made a cameo appearance in the,2 1999 sequel Fantasia 2000. It was the source to most of the mystical powers of the wizard Yen Sid and his apprentice Mickey Mouse. The hat is for magical use and with it one can be very powerful. In the wrong hands, the hat can be a deadly weapon as well as very dangerous and life threatening. The Sorcerer Hat has become a very popular Disney icon, and can often be seen in Disney media and entertainment.

It is a dark blue pointy/pointed hat with airy-aqua colored shapes of a moon and stars on it (in some other versions in mainstream Disney media, the shapes on the hat typically colored yellow).

While wearing the Sorcerer Hat, it can give its wielder limitless power and also an ability to utilize magic.

Past the credits in Disney's "'The Sorcerer's Apprentice", a figure resembling Maxim Horvath and seen wielding his cane, picks up Horvath's bowler hat in the Arcana Cabana shop, with a hat that resembles the magic pointed hat that Mickey Mouse wore in Fantasia inside a glass case shown at the beginning of the scene. The clip could possibly lead to a The Sorcerer's Apprentice II.

Appearances in other media

In a scene at the end credits of Disney's The Hunchback of Notre Dame, the Sorcerer Hat has seen in between of "Scene Planning" and "Producing Coordinators" credits list.

In the sequel The Hunchback of Notre Dame II, a conical pointed hat among Sarousch's personal items of the Cirque de Sarousch's greedy ringmaster Sarousch inside his , resembles the Sorcerer Hat.

The Sorcerer's Hat makes a cameo appearance in the 1988 TV special Mickey's 60th Birthday. The hat was used by Mickey Mouse when he uses the magic and fixes all the mess on stage that Roger Rabbit caused. It was later used by a fat bearded spellcaster (who was not Yen Sid) named "The Wizard", when he told him not to use it and warned him to uses his own magic instead of someone else's, he uses the hat and his magic powers to put a spell on Mickey, making him unrecognizable to anyone who sees him until he finds his own magic. Luckily, he does after some adventures and the Wizard briefly compliments him for it before breaking the spell and disappearing.

In the episode "Mickey and Minnie's Big Vacation" of Disney House of Mouse, Mickey dons the Sorcerer Hat to wash the flooded club.

In Mickey's House of Villains, Mickey uses the Sorcerer Hat to battle the sinister Jafar during the climax. Jafar knocked the hat off of Mickey's head, but Aladdin comes to the rescue and gives Mickey the genie lamp (which was Jafar's Lamp from Aladdin and Return of Jafar) which sucked Jafar in.

In the Season 2 episode "The Friendship Team" of Mickey Mouse Clubhouse, the Sorcerer Hat's design was put in the form of a partyhat as homage to Mickey's first feature.

In the episode "Cedric's Apprentice" of Sofia the First, Princess Sofia wore a similar shaped hat in glittery purple while learning magic beside the royal sorcerer Cedric for her sorcery test at Royal Prep. Sofia's Sorcerer Hat would not be seen again until the second season in "The Enchanted Feast" where upon looking into Morpho Mirrors, Sofia could see different reflections of herself wearing different outfits, including her sorcerer robes and hat.

The Sorcerer's Hat appears throughout season 4 of Disney-produced TV show Once Upon a Time, as a powerful artifact, capable of stealing powers from magic users. Queen Elsa's parents wanted the Hat to take away her ice powers, and Rumplestiltskin wanted the Hat to free himself of the control of the Dark One's Dagger which holds the accursed magical influence of the Darkness itself. It was also enchanted by Merlin to turn into its Box form with is the shape of a circular gold block-like treasure box with embedded diamonds.

The Sorcerer Hat made an appearance in the 1991 side-scrolling videogame Fantasia.

The Sorcerer Hat made a cameo appearance in 2 1994 homonymous videogame adaptions of the Disney cartoon show Bonkers on SNES and Sega Mega Drive/Genesis.

The Sorcerer Hat along with its rightful owner Master Yen Sid appears in the Kingdom Hearts universe.

The hat appeared in the 2001 mobile puzzle videogame Where's My Water?.

The hat appeared in Disney INFINITY.

The Sorcerer Hat made a special appearance in the 2014 motion-controlled music rhythm videogame Fantasia: Music Evolved. 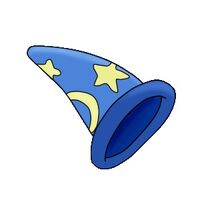 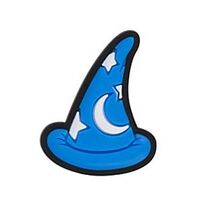 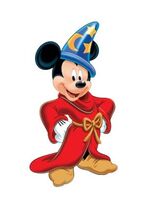 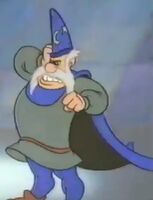 Mickey Mouse wearing the Sorcerer Hat as seen in the 1991 videogame Fantasia. 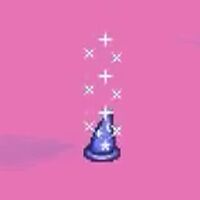 The Sorcerer Hat as seen in the 1994 videogame Bonkers.

The Sorcerer Hat as seen in The Hunchback of Notre Same. Princess Sofia in her sorcerer robes.

The Sorcerer's Box reverting to its original Hat form. 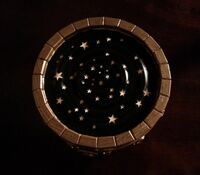 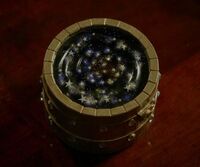 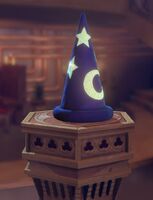 The Sorcerer's Hat as seen in Fantasia: Music Evolved.

Community content is available under CC-BY-SA unless otherwise noted.
Advertisement